Written July 14, 2016:
Well, I am leaving Ireland now!! I cannot believe it has been two weeks. This trip has been filled with laughter, new friendships, and discovery – both of the self and of place.
The main task that my professors put forth during this course in Ireland was and is to take note of details; be as specific and descriptive as I can, bring memories to new places, and overall offer an attempt to bring non-travelers to the place where I am. This kind of note taking/paying attention to details then is a way to draft poetry, and I’ve learned about many different kinds of poems as a result. My professors are both phenomenal, indescribable human beings… They offered my classmates/comrades and I a way to tap into the emotions and experiences we have and express them using poetry, prose, fictional literature.. And tap into the wisdom of many fantastic Irish writers and poets as inspiration.
I think my immediate response to what this trip has done for me is to encourage giving attention to that which does not demand attention. Sure, the sweet smell of waffle cones hot off the press will get me every time, but now I will even try to notice the light clinking of glasses in the background, or the rustle of a raincoat being adjusted, or the few small raindrops on the top corner of my booklet. The call to notice is a call to rebel in this fast-paced, over-stimulated world. I quite enjoy it 🙂
My absolute favorite part of this trip has had to be visiting Dun Aonghasa, which is a rain fort up on the cliffs of the Aran Island Inis Mor. The atmosphere is quite unlike anything I could find the words to describe, and is much better than all of the images and videos we find in movies and online.
The ocean waves 300 feet below create a steady noise that sounds like air conditioning, or like a freeway that runs parallel to a park. Occasionally, the waves crash with a thunder like someone the floor above you has dropped a heavy box on the ground, and you can feel it in your bones. Patches of grass all spread out between sharp, rigid and grey stone stretch for miles, with little flowers popping up every few inches to say hello. The sun passes in between soft, white clouds and warms my back and the stone I sit upon. The feeling I get on the cliffs is like after a wedding when everyone is joyful and life breathes through the air like an energy I cannot see.
Death is a common theme that threads together conversations of visitors who do not know one another as they tell jokes about falling off the cliffs, being blown by the wind, or staying there forever. There is a horizon, and we are told that it leads to Newfoundland. 3000 years of ruins stand, magnificently.
We also went to Coole Park, which used to be a royal property owned by the Gregory’s (Lady Gregory a powerful literary force in her time), and that too was magnificent. To think that one single man owned such a large, extensive property… Wow!! And now we trod across its trails, the crinkling of tiny twigs underneath our shoes and the shaking of trees by the wind as the buzzing bees circulate their flowers.
Galway was hosting the Irish International Film Festival for a bit when we first arrived, and I was able to see two films! The first, a set of five short films, made us sit on the edge of our seats, laugh, and imagine. The recurring thematic idea of the short films was about being trapped in situations, places, bodies.. The second film I saw was called Mom & Me and, though it was an Irish film, took place in Oklahoma (recently named manliest state in US by some magazine??) and focused on different men and their relationships with their mothers! The film was heartfelt and adorable 🙂
On another note, the fruit in Ireland is incredibly impressive!! Affordable and very yummy. I am currently eating blueberries and green grapes and boy are they tasty. There is a book store in Galway called Charlie Byrnes, and I bought 6 (six!!!) books for 6 (six!!) euro. Even though they are used, they are still in great condition and were some pretty good finds! I found a historical text on Greek women and resistance, which I am so excited to read, among the others.
As my group and I journeyed from place to place, there often was an unspoken sense of melancholy that would drape itself across our voyaging affects. I attempted to reflect on this feeling, and I share it with you to give you a sense of one of the many tones and moods of my journey in Ireland with Seattle fam.
—- We try so hard to find what is lost within us in these places. We search for wisdom, relevance.. Some revelation to propel our young and curious minds. Searching, searching, quiet longing. Using our imaginations to picture a life here – could we craft such an existence with our thoughts?

Be back soon with some words from POLSKAAAAAA <3 <3 <3 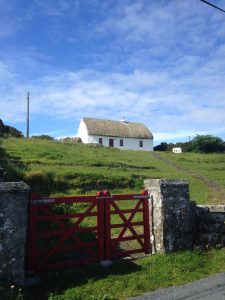