Skip to content
I have really abandoned writing for quite some time, but I am attempting to catch back up! Here are chronicles I wrote about a month and a half ago, about an experience I had two months ago. Wow, has time flown!

Originally written In mid-August, 2016 – Mag+s Part 1 <3 Hello again! It has been just about three weeks since I last wrote, and so much has happened since then. It will be tough to recall, but I am excited to try and remember all of the delightful moments regarding my journey through Poland for Mag+s and World Youth Day 2016. So to begin, I arrived in Łódź after a plane, train, and bus ride from Dublin. I was so excited because this was my first time being in a country where I didn't know a single word in the language and so could not understand almost anything that was listed on street signs, menus, etc. However, within no time I was reunited with another group from Seattle U (different from Ireland fam:)) and my language barrier vanished. For a little background info, MAGIS is a meeting of young people (ages 18-30) from all over the world who are interested in Ignatian spirituality. The program offers an opportunity to share a unique experience at three distinct levels: individual growth, relationships with God and others, and intercultural dialogue. Each pilgrim is placed in an experiment and out of the 95 experiments I got placed in 37. For everyone else who was placed in 37 (including Chris from my Seattle group, what are the odds?? They are slim.. 2000 pilgrims, 95 experiments, who wants to do the math?) we were to stay in Łódź and spend the week singing with pilgrims from Russia, Singapore, Poland, France, and the U.S. In our group, we had such a good time laughing together, singing, praying, and reflecting. Though there were so many languages spoken, English is the one language that many folks know (at least to get by) in addition to their home languages. This meant that even though I was in a non-English speaking country, I was comfortable in my (unimpressive) language abilities the whole time. For other pilgrims coming from non-English speaking countries who know English as a second/third/additional language or perhaps not at all, well I still heard great things from them! But certainly they faced many more challenges than I did, and perhaps spent the week in more silence than they normally would. One of the most important lessons I learned from this particular detail is that the language of prayer and worship and loving le Jesus surpasses any earthly language barriers that may exist.. Still, for me and many of my group members, it's difficult to process the idea of being accommodated wherever we go -sure, that's not why people learn or speak English, but if you think about historically the reasons for English becoming one of the more prominent languages, it's a sad realization. Primarily Britain and the US are responsible for colonizing lots of places around the world and, as a result, many folks have been forced to learn English to get along. I suppose me and some of my comrades as Americans feel sad for this especially because in the U.S., despite it being a "melting pot" or "land of immigrants," there is a system that requires English literacy to have access to the privileges, culture, and social and economic capital to be an American. You might be thinking, well yes most countries have only one language, so what is the difference? The United States is unlike most countries, however, and it demands of people to keep their "foreign languages" at home.. Hence why it is not more essential that public schools teach second languages, and why we United Statesians (not everyone of course, but particularly the whites of us) can go into other countries and expect that someone can understand and help us, generally without first trying to understand others or help ourselves. This is a very concrete example of privilege which has caused much dissonance and discomfort within me. I could write about this topic for such a long time, but never mind. Each day we would celebrate the Eucharist and have an Examen (which is one of St. Ignatius's spiritual exercises) in which we reflected on our day and paid close attention to movements we felt in our heart. I found this exercise to be particularly difficult because it required sensitivity of spirit, which I think I lack in the quiet moments when I am alone with my thoughts and with God. My mind feels like a storm in that I cannot sort out my thoughts - there is so much I can say but truthfully I felt out of touch with myself. The past year has been so busy and stressful that I seldom had to confront this feeling. I guess I am learning that I am very good at working in my external life - for others, for imagining a new world I would like to see one day. But when I look inside myself I no longer have the words to describe who I am or what I am feeling. These two weeks of pilgrimaging showed me so much of who I want to be and what kinds of things make me feel most myself (in the presence of the Lord). Hey, I'll get it together someday! I'm only just a young lady, and I suppose there is no rush. During this week of Magis I stayed in a home stay with a beautiful, kind, hospitable, and prayerful family!! My host mom, 6 months pregnant with her second child, welcomed me and my host sister from Saint Louis University as if we were her own. Everything that she said to me was unbelievably wholesome, good, resonant. I continue to feel her love even two weeks after saying goodbye, and I hope one day to return to her and her family :3 [caption id="attachment_38" align="alignnone" width="225"] 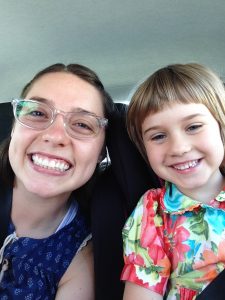 My host sister, Natalka!! [/caption]
The family of parishioners at this church where we spent the week at in Łódź was also indescribably inspiring, spreading love like wildfire. They showed so much hospitality and goodness it did not feel like real life. We (all of the pilgrims) were never strangers, but became their brothers and sisters and almost instantly. It is difficult to explain what this feels like, but I wish the feeling among everyone. It is like seeing God in the people around you. In fact, it is seeing God in the people around you, and having your heart overflowing, and not wanting the moment or the day or the week to end.
From one of my journals:
A woman says, first in Polish and then in English, that it is not language that matters. It is what’s in our heart. We can love each other across the world and live peacefully without speaking – it takes only kind eyes, gentle touch.