Woo!! So mom and Delaney were here (a surprise that I learned about when I was in Europe already, what a blessing!), and we saw the cities Budapest, Vienna, and Salzburg. In Budapest, we took a bike tour, wandered through the shopping streets, took an evening cruise down the Danube River, and began the journey of eating gobs and gobs of gelato. It took every second of each day to learn to say thank you in Hungarian, and I am certain I still cannot pronounce it correctly.

Going to Vienna was my mom and Delaney’s first European train experience which was just exciting as it was a first 🙂 We arrived in Vienna only to find that our air bnb had fallen through, so sitting at a cafe, we ordered some food and got back on booking.com. This might have been one of my favorite meals of the trip because it was so surprisingly authentic!!I had no intention of ordering creamed spinach, but I did and it was delicious. A traditional Viennese meal of sorts?

We made our way to our new accomodations and then I stayed in to work on some homework (from my Ireland Creative Writing course). For dinner I had a cucumber salad – refreshing! The next day we went to a church service, which I think was missing a whole chunk of Mass (Catholics call it the liturgy of the word) and so we were out of there in a minute and it was probably the most unfamiliar service I have ever attended because it was in German and did not follow the expected structure.
Since it was a Sunday and Vienna is almost entirely closed on Sunday, my cousin and I took to walking the streets and running into little gems of architecture or street art. We went to a natural history museum (super rad) We eventually found a film festival that had food trucks inspired by cuisine from all over the world!!
Something very popular in this part of Austria was to eat fried sardines, whole, by the plateload. We were too chicken to try it out.
Then we headed over to Schönbrunn Palace which was breathtaking in every way. The gardens outside were fantastic and the rooms inside the palace were, again, I could not do it justice with an attempted explanation. It’s enormous and a must see if you ever go to Vienna!

Making our way to Salzburg was abeautiful journey as the landscape in Austria is lovely. We stayed a bit out of town at a quaint hotel and took the bus into town where we visited the fortress at the top of the hill (featured in the Sound of Music!!) and walked through the cute streets of shopping. I think this city was my favorite to visit with my mom and Delaney, as it was filled with nature and spontaneity. We went to a café and I tried to ask the Austrian waiter if he wanted to hang out with us the next day (at my mother’s request lol) but he declined. We still had a blast anyway!

We found ourselves in the pouring rain hiking up the Maria Plain hills. It was peaceful and we were steps away from a deer!! After a day of soiled shoes and shivering shoulders we made our way back to town where we went to an apple struedel cooking class. Johann, the chef, was so kind and gave us free goulash! We learned to bake apple strudel, which is a less unhealthy version of apple pie 🙂 He was kind and funny and it was so refreshing to spend time with a local after being in tourist mode for a week. 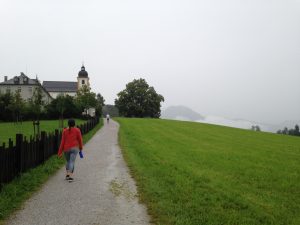 Maria Plain in the rain <3[/caption] The next day we took a train to Munich and boarded a plane to Venezia, Italia!!